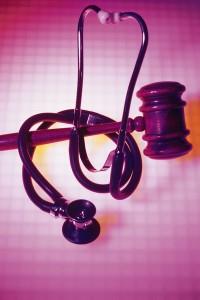 A $620,000 medical malpractice award rendered by a Baltimore city trial court was overturned by the Court of Special Appeals of Maryland last month, after the appeals court determined that the trial court had erred in the admission of a hospital bill the authenticity of which had not been stipulated to prior to the trial.

The plaintiff went to the emergency room at the University of Maryland Medical System Corporation after having experienced a headache for several days. She received a lumbar puncture (spinal tap) during the visit, which lasted from the evening of May 30, 2007 to the morning of May 31, 2007. The plaintiff alleged that during the spinal tap she (a) received narcotic pain medication, and (b) that a physician pushed down on her neck, causing her pain.

After she was released from the emergency room, the plaintiff experienced severe pain in her neck, shoulders, and upper back while at home. She went to her primary care provider on June 1. "She was subsequently diagnosed with cervical spondylosis/degenerative disc disease and an acute herniated disc at C4-C5, for which she had several surgeries over the next year without complete resolution of her pain," according to medicalmalpracticelawyers.com. "The plaintiff subsequently filed her Maryland medical malpractice lawsuit, alleging that her herniated disc and the resulting pain was caused by the negligent performance of her lumbar puncture."

Prior to the trial, both parties stipulated to the authenticity of the plaintiff’s hospital bill from June 1 - June 6. Charges from her emergency room visit of May 30 - May 31 were not stipulated to, and were redacted prior to the bill’s introduction as evidence in the trial.

During the trial, the plaintiff’s attorney attempted to substantiate her claim that she had received narcotics during her visit to the emergency room, in order to provide an explanation as to why she did not feel any pain (which she alleged was a result of negligence during the spinal tap) until she was at home (presumably the medication would have worn off by then). In order to allow the attorney to substantiate this claim, the trial court allowed the un-redacted hospital bill from May 30 - May 31 to be introduced as evidence, even though this had not been stipulated to prior to the trial. The attorney proceeded to question the Defendant’s expert on narcotics medications on the bill. Doctors who treated the plaintiff alleged she had not been given narcotics.