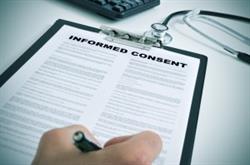 The plaintiff in the case had four surgeries performed on her toe by the defendant surgeon. The result was a shortened toe. She and her husband filed a lawsuit in trial court claiming medical negligence and loss of consortium. The trial court found in favor of the defendant, but the appellate Superior court granted a new trial on the grounds that "the defense’s repeated references to informed consent during trial was improper because the plaintiff’s complaint was that the surgeries should not have been performed."

The plaintiff’s lawyer argued that the defense was wrongfully equating the plaintiff’s signing of informed consent forms with consent "to suffer the injuries she sustained." The plaintiff’s lawyer argued that the surgery should not have been conducted at all, and thus the surgery constituted medical negligence. Therefore, the idea that the informed consent forms essentially constituted the patient’s consent to the injuries she sustained, was irrelevant, as medical negligence had occurred even before the forms were signed.

The defense claimed that the consent forms were relevant to the plaintiff’s state of mind and credibility, and that because the forms delineated the potential risks, that they were relevant in determining if the surgeon had conducted the surgery (and treatment of the resulting complications) in a manner that was negligent.

The Supreme Court of Pennsylvania has not yet issued an opinion on the case.