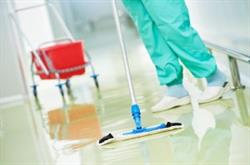 A physician in Maryland recently was awarded a $4.4 million verdict in a lawsuit he filed against the hospital at which he worked, as well as the company that trains and supervises hospital employees. In the suit he alleged that he slipped and fell and broke his wrist as a result of the negligence of these two parties, as there was no sign to inform him that the floor was slippery. Learn more about the case below.

The man was a critical care physician who worked in the intensive care unit of the hospital in November 2010 at the time of the incident. The physician entered a patient room in the ICU that was unoccupied. Unbeknownst to him, the floor in the room had just been waxed, and there was no sign to inform an entrant to the room of this fact. The physician slipped and fell, and broke his wrist.

As a result of the broken wrist, the plaintiff alleged that he was no longer able to perform the surgical procedures required of him as part of his job.

The plaintiff filed suit against the hospital and the company that was responsible for the training and supervision of hospital employees, alleging negligence in their failure to warn him of the slippery floor. The hospital settled before trial, so the sole defendant at trial was the training company.

However, the trial jury found in favor of the plaintiff. Of the $4.4 million verdict, $33,000 were for non-economic damages, and the rest were for economic damages including past and future lost wages, and medical expenses.