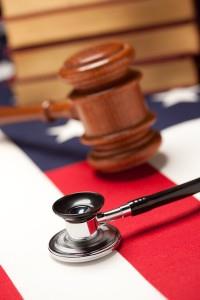 A federal medical malpractice case involving a 7-year old girl has been settled in the amount of $125,000. The girl lost her thumb after receiving treatment at a Navy clinic in 2011, after which circulation in her thumb became impaired, causing tissue death and necessitating amputation of the thumb.

On August 12, 2011, the then 7-year-old girl injured the tip of her left thumb in a car door. She was taken to an acute care clinic run by the U.S. Navy. There, medical staff performed a nerve block and sutured the injury. They then applied a compression wrap and discharged the child. "The mother’s federal medical malpractice lawsuit (federal tort claim) alleged that the compression wrap acted like a tourniquet that caused the loss of proper circulation to the thumb," according to medicalmalpracticelawyers.com.

The next day, the child told her mother that the wrap was too tight. Her mother removed the compression wrap and replaced it with a loose-fitting gauze dressing. Her mother brought the child to the Navy clinic again on the 15th, 16th, and 17th of August. "On the 17th, a clinic doctor diagnosed necrosis of the pulp, which ultimately led to the child having her left thumb amputated on August 24, 2011."

The girl had to learn how to write with her right hand, as she was left-handed at the time of the injury. Her fine motor skills have also been affected. She has also suffered taunts from schoolmates at the loss of her thumb.

The plaintiff filed a federal medical malpractice lawsuit against the clinic, seeking $2million in damages. The case was settled for $125,000. The girl will receive lump sum payments at the ages of 18, 21, and 25, and will ultimately receive $99,524 of the settlement.