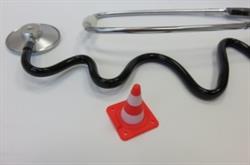 The case involves a woman who had been admitted to the hospital on June 13, 2010, with chest tightness and shortness of breath. Her room had a private bathroom attached. Two days later, as she was returning from the bathroom to her bed, "she slipped and fell on the wet floor that appeared to her as having been recently mopped, thereby injuring herself," according to medicalmalpracticelawyers.com. "The plaintiff claimed that there were no warning cones placed on the wet floor."

She filed her official complaint on June 11, 2012, claiming ordinary negligence. The defendant hospital moved for summary judgment, which was granted by the trial court. The trial court ruled that the action was actually for professional negligence, stating that the negligence was "committed in the act of rendering services for which the hospital is licensed," and that "because the claim is one brought by a patient against a hospital for an alleged injury sustained in the course of the hospital’s care for her it is a claim for professional negligence."